We had pretty much visited all the places we wanted to in Banff & Yoho National Park and were planning to drive through Kootenay National Park on our way back to Montana.  There were not a lot of highlights we were planning to stop at in Kootenay so we figured we could have a late start and decided to go into the actual town of Canmore to eat breakfast.

We went to Chez Francois Restaurant, the one on 2nd Avenue (there are two locations), which was not too busy when we got there.  We ordered an omelet, a smoked salmon benedict and an interesting concoction called the Surprise which consisted of a sunny side up egg, ham and cheddar cheese between two slices of french toast that were then topped with fresh fruit.  The food was good and filling and while eating we saw a bunch of rabbits hopping around outside (we were seated by the window).  Some were the typical grayish-brownish but there were a few black ones too.  The icing on top at this restaurant was if you checked in on Yelp you got 10% off your bill.  A great way to start the day! 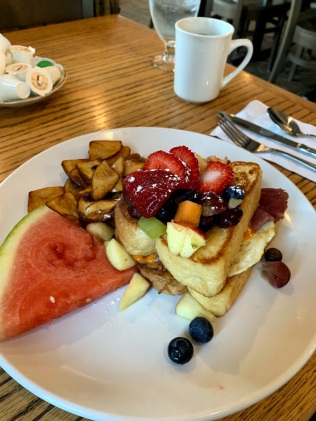 After breakfast we packed up and hit the road.  Kootenay National Park borders the west side of Banff National Park and the south side of Yoho National Park and is located in British Columbia.  To drive through Kootenay you would take Highway 93.  Unfortunately the park is susceptible to wildfire as it is in an area termed “lightning alley”.  In fact as you drive or hike through the park, you will see endless amounts of once-burned trees.

Our intended first stop in Kootenay was Marble Canyon.  There is supposed to be a short trail that leads to views of gorges eroded by the creek.  It was not meant to be though as they were doing construction in that area and had closed turn-off.  I believe you could still hike to it from our next stop but that is a much longer trail.

Instead we moved onwards to the Paint Pots area not to far from Marble Canyon.  There is also a short trail here that takes about 40-60 minutes that leads to ochre pools.  The indigenous people use the ochre as a painting material.  While not a difficult trail, it can be a messier trail as a portion of the trail was wet when we hiked it and the ground is a reddish-color so I got a bit of them on my shoes and a little on my pants.  It was all easily washed off but be careful where you step so you do not splash too much of it. 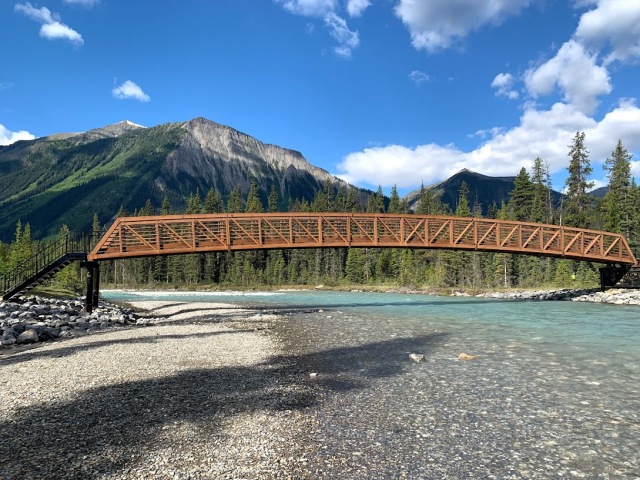 We made one or two more small stops but really beyond the Paint Pots we did not really stop anywhere else significant. 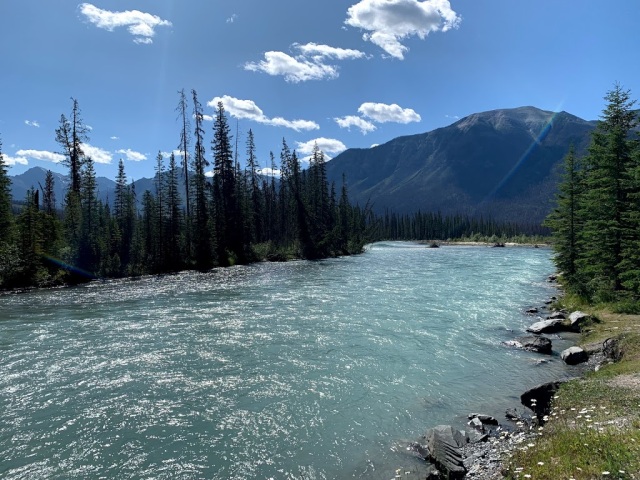 There is one other significant point of interest which is Radium Hot Springs.  There are natural hot pools here that you can take a dip in but we did not feel like it.  However, I think we did see the most people in this area versus other areas of the park.

Once we exited the park, we continued until we hit the border crossing between Canada and the U.S. and then returned the previous hotel we stayed at while in Montana.

Had a great time celebrating Carmen’s birthday yesterday @goldentiki @theescapegame @lostspiritsdistillery
It was so worth coming back to try entrees since they were some of our favorite dishes @blacksheepvegas
Was lucky to win #revivela tickets from an @lamag giveaway and had an amazing time with @1milldreams where we dressed up, watched amazing performances and had great food
Back in civilization! Treated ourselves to some delicious seafood including clam chowder, fried calamari, fried oysters, halibut cakes and geoduck ceviche
Tried out new boba/dessert place @heukhwadang_ktownla and had a dalgona cream milk tea that was different but delicious 🤤
The new @delta sky club in Terminal 3 at LAX is really beautiful. Had time to stop by yesterday morning and it has me thinking I might need to fly Delta more ✈️
Loading Comments...
%d bloggers like this: