Since we were not able to enter the Many Glaciers portion of Glacier National Park the previous day, we wanted head straight there from the hotel.  The ranger had told us that the earlier the better and to try to at least get there before 10 am although he could not promise the entrance would still be open even then.

Getting from our hotel to Many Glaciers still took a bit of time though as we cut through the park via the Going-to-the-Sun Road which was a slow drive even without stopping as there are more curves and more cars.  On the way through, we did consider stopping at Logan’s Pass but even at somewhere between 8 am and 9 am when we passed by, the parking lot already looked full and cars were waiting for spots to open.  So if you want to be able to stop at Logan’s Pass, I suggest you get there REALLY EARLY.

Luckily when we arrived at the Many Glacier entrance this day, it was open!  And quick warning, the road leading in to the Many Glacier entrance has A LOT of potholes.  Some of them are even quite large.  However, once you pass the entrance, the road is fine.  We originally drove all the way to the end of the road but it was primarily trailheads towards the end so we turned around and pulled into a spot near the Many Glacier Lodge by Swiftcurrent Lake.  The Lodge has rooms facing the lake and the view is beautiful so it is something to consider in terms of lodging.  On the lake we could also see a few people kayaking.  Nearby the Lodge there are more trailheads and we saw a group of people starting a trail on horseback.

After we finished exploring the Many Glacier area, we headed north towards Waterton Lakes National Park.  The thing to keep in mind about Waterton Lakes National Park is that it is actually in Alberta, Canada.  That means if you want to visit it alongside Glacier National Park, you need to bring your passport or you will not be able to cross the border to enter the park.  I do think it is worth a stop though if you have time.  In fact, the two parks together are known as the Waterton-Glacier International Peace Park.  The rotary clubs of Montana and Alberta proposed the unification of the parks back in 1931, intending not only peace and goodwill between the two countries but also to emphasize the importance of the international nature of wilderness as well as the cooperation needed to protect it.

But that being said, if you do not have your passport on you, you will not be able to enter the Waterton side of the park.  We happened to have ours on us because we were already intending to enter Canada to go to Banff National Park although I did tell my brother who was not joining us for Banff to bring his just in case we decided to go to Waterton Lakes National Park.

Driving into Waterton Lakes National Park from Glacier National Park is fairly easy.  From the east side of Glacier, you just take the US-89 heading north and then connect to MT-17 north.  The MT-17 actually heads into the park area and the road between the two parks by the border is only open during what looks like daylight hours.  Once you cross the border into Canada, the road is the AB-6 and you continue heading north until you connect to AB-5 west.  At this point you are in the park but if you take it to the end, it will bring you to the Visitor Centre and the small town of Waterton Park.  For reference, from St. Mary Visitor Center on the east side of Glacier to the Waterton Lakes Visitor Centre it’s about 50 miles which is a little over an hour also depending on how long the wait is at the border.

It did not take us too long to cross the border although it was interesting to see cyclists in line to cross as well.  For whatever reason, there are a lot of bees and butterflies nearby the border crossing.  Perhaps because of all the wildflowers.  When it is your turn (and this applies both for crossing into Canada and into the U.S.) you need to hand over the passports of everyone in the car.  The officer may ask you a few questions as he checks the passports and you should take off any sunglasses or hats when the officer is checking as they will need to see your face.

We drove straight to the Visitor Centre first.  There is a lot of street parking around town with lots of open spots.  At the Visitor Centre, we spoke with a ranger who unfortunately was not able to give us much to do since we said we were primarily planning to drive and would only do short easy hikes.  Before arriving, I had hoped we would be able to drive to the Red Rock Canyon area which looked beautiful in pictures.  However, the park had a bad wildfire in 2017 and pretty much all other roads other than the one we came in on were closed to vehicles.  Hikers and cyclists still had access but it would be a long trip.  Red Rock Canyon specifically would have been about 17.4 miles roundtrip.

Instead the ranger mentioned there were a few easy trails around town that followed the lake as well as a waterfall just a quick walk away from the Visitor Centre.  She also mentioned a street in town full of restaurants that are a great option for lunch since it was a around lunchtime.  We decided to follow her advice and walked around town a bit and grabbed lunch at Pizza of Waterton.  We all ordered sandwiches there and they were very good.  The pretzel baguette that they used for some of the sandwiches was especially delicious.  I ended up ordering the Chicken Parma Sandwich and a Fernie Brewing Co. What The Huck huckleberry wheat ale.  The sandwich was amazing and one of the best chicken parmesan sandwiches I have had.  I got the beer because apparently huckleberry is very abundant in the area.  If you’re wondering, a huckleberry looks like a small blueberry.

After lunch, we walked over to Cameron Falls.  There is a long trail leading from the falls that leads to some small lakes but we just took pictures by the falls and walked back to our car. 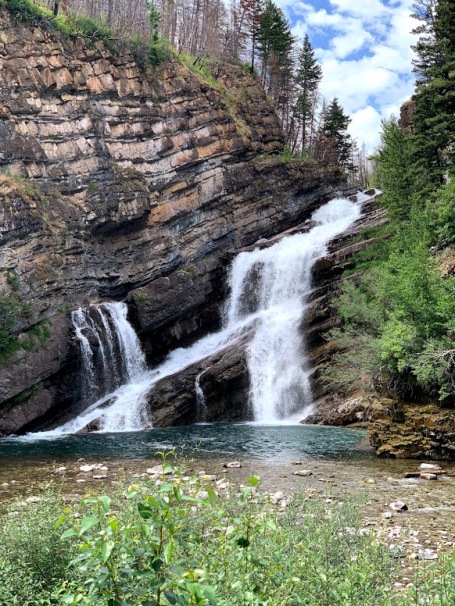 On the way back to the car we did have a brief wildlife siting.  We saw a couple of deer just chilling in people’s yards.  No wonder the information sheet on the park mentioned not feeding the deer in town.  They really were just wandering around town. 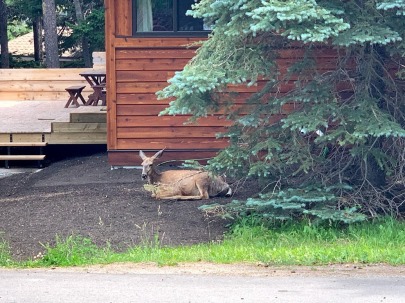 From the town area, we started on the road back but stopped by the Prince of Wales Hotel just down the street from town.  The view from here was beautiful and if you have time, you can stop by the hotel for afternoon tea with a gorgeous view of Waterton Lake.  We did not partake in afternoon tea but we were outside taking pictures for quite a while.  There is also a gift shop if you are looking for park souvenirs. 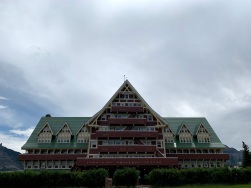 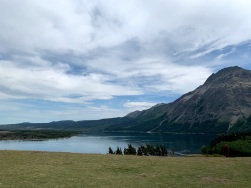 Also, keep in mind, Waterton Lakes National Park is a Canadian national park and does have entrance fees.  If you have an annual park pass for the U.S. parks it will not work.  For us, my mother had already purchased a group/family annual Discovery Pass which is the Canadian equivalent for an annual park pass ahead of time to hang on our vehicle.

On our way back to the hotel, we decided once again to bypass the Going-to-the-Sun Road and instead circled outside the park.  We ended up seeing horses by the road again and a lot of cows grazing around. 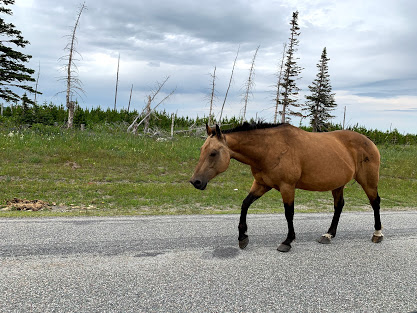 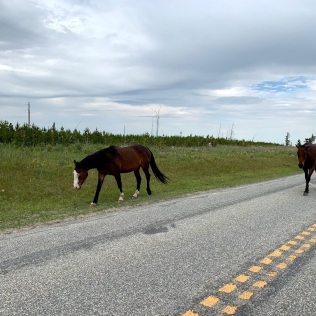 As a joke, I was saying that because we saw all the cows on our way back we decided to get Chick-fil-A for dinner since their mascot is a cow that says to “Eat Mor Chikin”.  Plus it was conveniently close to our hotel (the real reason).