A little less than two weeks ago, I spent 3 days in Mexico City, Mexico for a friend’s 30th birthday trip.  I ended up booking the trip on Aeromexico although instead of booking one round-trip, I booked two separate one-ways as it was actually cheaper to do so.  This was discovered by searching for flights through Google Flights.  I booked a direct flight from LAX to Aeropuerto Internacional Benito Juárez (MEX) airport in Mexico City through the Aeromexico website but then book the return flight (also direct) through Orbitz since it was actually cheaper according to Google Flights (and it was).  I don’t remember exactly how much booking the two one-way flights saved but it was somewhere between $50 to $100 if I remember correctly.

I took the morning flight out of LAX on a Friday.  Aeromexico is located in Terminal 2 and the security lines were very empty.  I didn’t even bother to use the CLEAR kiosks since there was barely anyone in the TSA Pre-check line and also very few people in the regular line.  I’m not sure if it’s always like this or because it was a Friday morning.  In the terminal, if you have Priority Pass membership, you can stop by the Virgin Atlantic Clubhouse.  It’s on the second floor across from the Delta SkyClub.  The lounge was pretty much empty and had very minimal food and drink items.  Be aware, access to this lounge for Priority Pass members is only from 5:00 AM to 10:45 AM.  After that, you can use credit at Barney’s Beanery from 10:30 AM to 12 AM.

For the flight to Mexico City, upon check-in, I decided to upgrade to an AM Plus seat for $49.  This is similar to a Main Cabin Extra seat on American Airlines or a Delta Comfort+ seat which a few extra inches of legroom.  Part of the reason I decided to upgrade is because the AM Plus section was very empty and I was able to get a whole row to myself.

TIP: I upgraded to AM Plus at check-in for only $49 but when booking and even before check-in, the price was $79.  For an upgrade to Clase Premier (First/Business Class), the lowest bid for the Bid-up was $200 but at check-in, it was only $150.  Admittedly, my flight was fairly empty in AM Plus and Clase Premier but it’s something to keep in mind if you’re thinking about upgrading.

Aeromexico boards by zone and they have columns with the zone numbers in the waiting area that you line up at prior to boarding.  I think this simplifies the boarding process and you have less people standing around blocking people from boarding.  Since I purchased an AM Plus seat, I was a part of Zone 2.

Upon entering the plane, flight attendants were stationed throughout the aircraft to assist passengers.  Obviously, this being a Mexican airline, the primary language spoken was Spanish.  I was a little surprised that though I demonstrated I had very little grasp of the Spanish language, they consistently spoke Spanish to me throughout the flight.  Luckily through my bare minimum Spanish mixed with English and hand gestures, everything worked out.  However, I feel like they knew more English than they were letting on but it was a good initial practice.  I probably should’ve reviewed my Spanish more prior to the trip but the trip kind of snuck up on me. 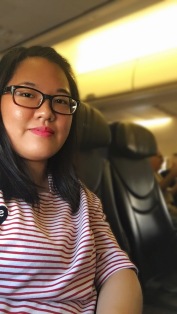 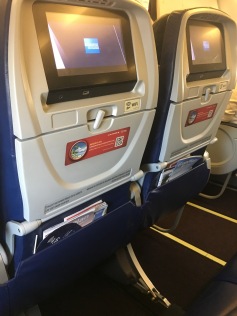 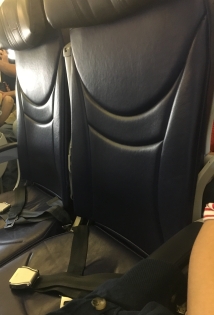 Since this is not an US airline, they served a small meal even in economy class.  The meal on the way there consisted of a croissant sandwich and apple sauce.  The most I can say is that it was a meal.  It wasn’t particularly good or bad but it was fairly filling. 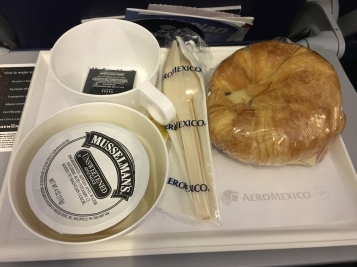 During the flight, the flight attendants will also pass our Mexican Tourist Cards that you’ll likely need for immigration is you’re a US Citizen.  I say likely because when my friend and I went through immigration, they had us use the kiosks which meant the physical card provided to us on the flight was not necessary.  Make sure you keep the portion immigration returns to you as you’ll need it to depart.

Now, like my headline says, I was seated in Clase Premier on the way home but I’ll get to that in a little bit.

Suffice to say, the whole process before getting on my flight back to Los Angeles was quite strange.  My flight leaving Mexico City was at 7:30 PM.  We got to the airport around 6:15 PM.  Admittedly, we probably should’ve left for the airport earlier but got distracted by food.

My friends and I first tried to check-in at the kiosks outside Terminal 2 but the kiosks directed us inside.  After a quick wait, it was our turn to check-in and here is where things got strange.  The agent told us that our flight was already in final boarding and we would not make it.  We were shocked.  How could our flight already be in final boarding when the listed departure time was still over an hour away?  We asked if she could check again.  We hadn’t received any notice our flight’s departure time got moved up.  She insisted that we were too late.  I asked the agent when boarding began and she replied that boarding always begins 45 minutes before the departure time.  I looked at my watch which stated it was just before 6:30 pm.  I showed her the time and said that according to my watch, boarding shouldn’t have started yet.  She looked confused and admitted that it was a little over an hour before the departure time and therefore boarding shouldn’t have started yet.  She took our passports and disappeared to a counter at the end and was speaking with another agent.  Luckily, when she came back she had our boarding passes.  There was no explanation as to what had happened but we took our boarding passes and headed to security since boarding would be starting soon.

Security was incredibly empty and I breezed through easily.  Not sure what my friends had in their bags but all three of them triggered an additional search of their bags.  Then we headed to the gate, bypassing any lounges since we ran out of time.  Otherwise, Priority Pass membership can get you into the Aeromexico lounges and if you have the American Express Platinum or Centurion Card, you can access the Centurion Lounge.

At the gate, passengers were beginning to line up in their zones and after checking our boarding passes, we discovered I was in Zone 2, two of my friends were in Zone 4 and one was in Zone 5.  I was pretty surprised to be in Zone 2 because we had all selected seats in the same row and I didn’t purchase an upgrade to AM Plus this time.

We split up into our respective zones and as I was standing in line waiting I thought I heard the gate agent call my name though I wasn’t sure because I hadn’t really been paying attention.  Since I was the first person in Zone 2, I was a little reluctant to walk to the gate agent to check since I’d lose my place in line but looking at the board behind the gate agent, I noticed abbreviations under the upgrade list that could fit my name.  I decided to chance it and walked over.  The agent confirmed she called my name, asked for my boarding pass and then handed me a new one for Clase Premier.

I took the boarding pass but I was pretty confused and actually I still am.  I don’t have any Aeromexico or Delta status, much less any Skyteam status so I’m not sure how I ended up on the upgrade list.  Also, I wasn’t even in AM Plus but in regular Economy.  But I wasn’t about to turn down an upgrade to the front of the plane.

I got in line for Zone 1 and boarded the aircraft.  I was assigned a window seat and after getting comfortable was sad to realize this must be an older aircraft.  Whereas my flight to Mexico City had seat-back entertainment, this flight did not.  Instead there were the shared screens that dropped from the ceiling. 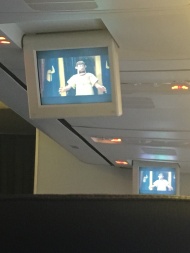 Not long after the plane took off, service started with mixed nuts and drink of choice.  Later on there was a meal service.  I believe there were two options for Clase Premier but they ran out of whatever the pasta dish was and only had chicken left.  Let’s just say I can see why nobody wanted the chicken.  The chicken was overly salty, the salad had not much going for it and the dessert was overly sweet.  Luckily I was mostly still full from tacos I ate before heading to the airport so I tried a little of everything and settled in with a book and music from my phone.  I pretty much zoned out the rest of the flight so I can’t say much else on the service. 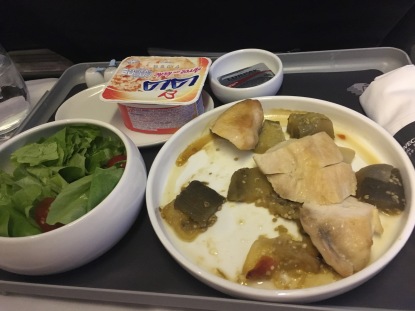 Landing at LAX, we pulled into a gate at Terminal 2 and then were shuttled over to TBIT to go through immigration.

I would probably fly Aeromexico again versus a US airline (if at similar prices) since there is food provided.  Also, if you get a newer plane with the seat-back entertainment, it’s a great option.  Plus, how can I say no to an airline that randomly upgraded me?