So, for my Tokyo & Seoul trip, I’m going to break it down in various posts, from the hotels, the flights and the various activities.  To begin with, I wanted to start with my first hotel in Tokyo.

At the recommendation of friends, I decided to book a twin room at the Hotel Sunroute Plaza Shinjuku.  As you can tell from the hotel’s name, it is located in Shinjuku, just a few blocks from the South Exit of the JR Shinjuku Station.  Also, a friend cautioned me when book to not confuse this with the Hotel Sunroute Higashi Shinjuku as he made that mistake when booking.  He said the Higashi hotel was perfectly adequate but he believed the Plaza hotel had slightly larger rooms.

I booked a twin room averaging about $198/night over 4 nights but the hotel also has various rooms with 1 double bed at cheaper rates.  There are a lot of booking options, you can book direct through the Sunroute chain or through the various OTAs.  I booked through Orbitz because they had a promo code for 15% room rates and the reservation could be cancelled if necessary though I still had to pay upfront.

The reason I chose to stay in Shinjuku though was primarily because the last time I was in Tokyo, I didn’t spend a lot of time in Shinjuku and didn’t really make it to the Shibuya area which is fairly close by.  Also, Shinjuku is a great transportation hub with the JR station and various Tokyo subway line stations making it easy to get around.   The JR N’EX (airport express line) also stops in Shinjuku which is how we got to our hotel from Narita Airport.  But most importantly, I had a day trip I booked through Viator and the meet-up was early in the morning and in Shinjuku.  My friend that was traveling with me is not a morning person so I figured it was prudent to stay close to the meet-up site in order to get there on time.

The actual location of Hotel Sunroute Plaza Shinjuku was also pretty ideal as it was a short walk to the JR station and the various other subway line stations and also close to some of the various restaurants and bars I was hoping to visit.  While the Shinjuku area is very busy and noisy, the hotel was a little off the main road so it was actually fairly quiet.  It’s also not too far from the JR Yoyogi Station which could be an alternative to using the JR Shinjuku Station which is much larger (and confusing) but you do have to walk across subway tracks which can a long time if various trains are crossing in a row.  My friend and I waited maybe 8-10 mintues until the posts went up and we were allowed to cross.

The hotel is pretty easy to find and is across the street from a convenience store and less than a block from a McDonald’s.  Walking in there are two automatic sliding wood doors that you get pretty close to before they open.  As someone who grew up in the US, I felt like I practically walked into the door before it opened but it seemed to be pretty standard in Tokyo, probably to keep heat from escaping.

The lobby is nicely done and check-in was quick.  The front desk agent spoke pretty good English and helped us get checked-in and helped us buy Airport Limousine Bus tickets to Haneda Airport.  The Airport Limousine Bus conveniently picks up directly at the hotel both for Haneda and Narita Airport.  There was even a robot in the lobby though I didn’t really interact with it.

My friend and I didn’t really utilize any of the restaurants or facilities in the hotel though if I remember correctly there’s a restaurant and bar.  The only thing we did use were the vending machines that were found every few floors of the hotel.  It’s pretty awesome to just walk down the hall to buy a water or soda or even beer! 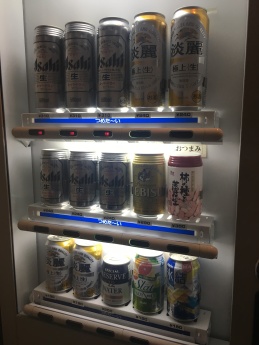 We were assigned a standard twin room on the 7th floor.  The room was fairly spacious considering we were in Tokyo.  The twin beds were actually bigger than a twin bed in the US, probably somewhere between a twin and a full bed.  And there was a small desk and chair, TV on cabinets with a mini fridge and a small armchair.  There was also enough room for both my friend and I to have our check-in bags open to rummage and still space to walk around without jumping over anything.

Please ignore the slight mess in the photo.  We were tired from traveling and already got comfortable before I remembered to take a photo.

The bathroom was also decent-sized and had large bottles of shampoo, conditioner and body wash on the tub and also other amenities such as toothbrushes, combs, razors, etc. and plenty of space to still lay out our own skincare/make-up kits.

The first day, there were also two energy drinks in the mini fridge for the occupants but those are only provided the first day.  The mini fridge was really useful as we had a place to keep drinks cold and to save all the rice balls and other snacks we bought while out.

The room also had a humidifier and I did pour water in but I’m not sure it made that much of a difference.  There was also free wi-fi but as we had rented a portable wi-fi device at the airport, I just connected to that throughout my stay so I couldn’t really say how the internet was.

I did really like the Hotel Sunroute Plaza Shinjuku and highly recommend it to those looking to be close to the action.  It’s quiet at the hotel but walk a few blocks and it’s the city that never sleeps and with great access transportation wise.  There are also hundreds of food, shopping and drinking possibilities in the area.  And for a hotel in Japan, the rooms were spacious as was the bathroom and for non-Japanese speakers, the front desk staff spoke decent English.  It’s also easy to get to/from the airports with the JR N’EX train stopping in JR Shinjuku Station and the Airport Limousine Buses going to both Haneda and Narita Airports.